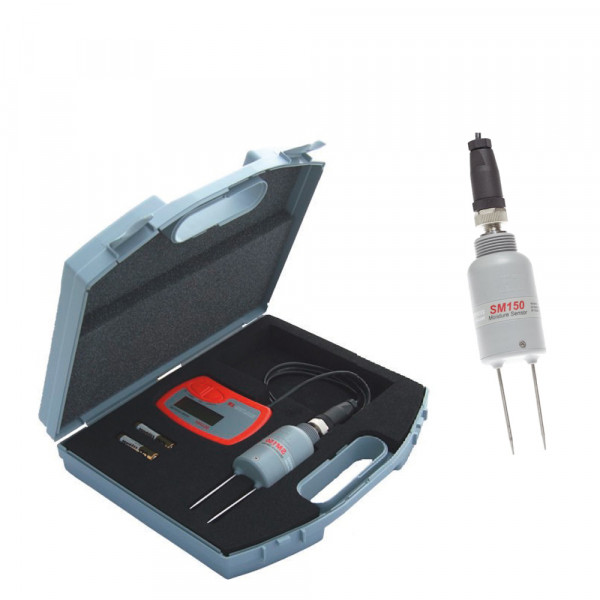 The SM150 soil moisture sensor determines the volumetric soil moisture (m3 water/m3 of soil = vol. %). It operates based on the FDR (frequency domain reflectometer) principle. An electromagnetic field of 100 MHz is generated by the transmitting rod in the probe. The permeability of the soil field is then measured by the receiving rod. The permeability depends on the water content of the soil, the soil type and the amount of entrapped air. A measure of the permeability of this electromagnetic field is the relative permittivity. Since the relative permittivity of water is much greater than that of soil or air, the measurable change in the electromagnetic field is determined mainly by the soil moisture.
This type of measurement has a very low sensitivity to the salt content (salinity), temperature, and soil type. For more accurate measurements, it is possible to distinguish between mineral (sand, loam, or clay) soils and organic soils. Measurements from the SSM 150 soil moisture sensor can be displayed using the HH150 portable analysis unit.

Data from multiple SSM 150 sensors can be recorded using the GP1 data logger and then imported to a PC. A maximum distance of 100 metres between the sensor and the data logger is possible. Irrigation can be controlled by taking advantage of the programmable relay output. A tensiometer is used to measure suction tension. The porous cell of the tensiometer uses capillary action to transport water outwards into the drier soil. A negative pressure is then created within the closed pipe. This negative... ...more Topseller